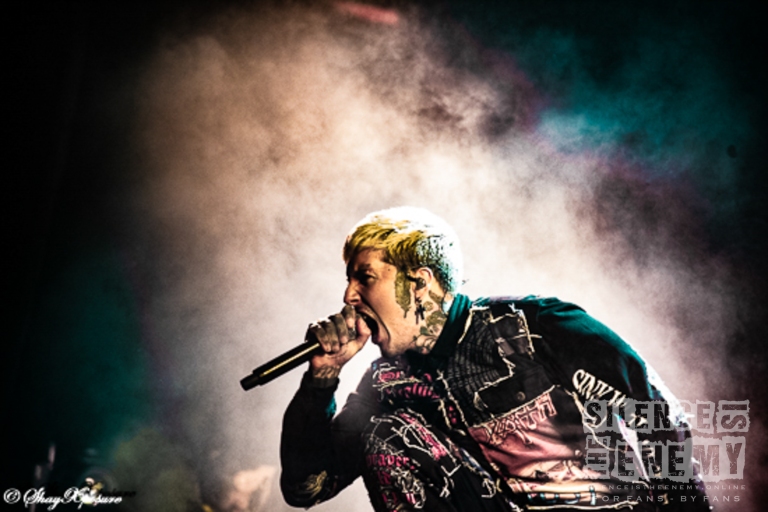 I was in attendance of the sold out and much anticipated show of ‘Bring me the Horizon’ in New York City at the Hammerstein Ballroom on both January 29th and 30th. BMTH were accompanied by ‘Fever 333’ and ‘Thrice’.

The Hammerstein Ballroom as the name suggest is beautiful architecture building that has an opera house style décor. It is very spacious and can house approximately 2200 people. The sound quality was superb, and all sets were timely.

Leading up to the show there were a few singles being played on satellite radio, first one being ‘Mantra’ which sounds like your typical BMTH song so it did well however, when I did ask a few people if they were going to see the show I got mixed responses. One person was excited as hell and the other said “no, they are pop rock”. Taken aback a bit I thought, “I suppose we are labelling” our rock now. On Instagram fans have been complaining about wanting a new album but now that the band has delivered, they were mixed emotions about the style of music that they had taken.

On the day of the show the band announced that they will be doing a CD signing for fans that arrive at 3pm and that those fans will also gain early entrance into the venue. Hours later that post was taken down and rightly so as the queue was a bit long. After waiting in line for more than hour it was time for us to go in. It all happened so quickly that I had no time to react nor did the new friends I made while standing in line. I only remember smiling and saying that I was very excited, this was my first show and then hearing what the other girl was nervously saying, the moment was over in a flash. 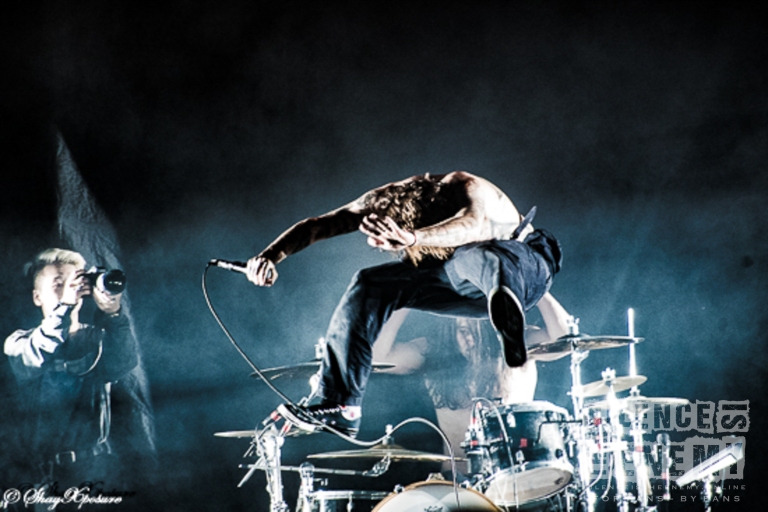 The first band that played was ‘Fever333’ which I’ve seen before when they just came on the scene and had only 5 songs. ‘Fever333’ are a three-piece American rock band from California with lead singer Jason Aalon, Stephen Harrison on guitar and Aric Improta on drums.

With each member contributing their own uniqueness to the band they make a dynamic trio. In the same token the 3’s of the band stands for community, charity and change.

After witnessing their first show in a very small but intimate venue and only having 5 songs to perform at the time I could already tell that they were going to be explosive. The energy that Mr Aalon brings to the stage is incredible and their message is meant to unite the masses.

Several months later I was at a sold-out show for ‘Bring Me The Horizon’ and as predicted there they were, ‘Fever 333’ and everyone knew who they were, knew every word to every song and it was incredible how strong the bond in the audience was because they project that energy on stage.

In fact, they were several folks that were actually just there for this band only.

The name is so fitting as the fever was so contagious, it spread like wildfire.

Their music addresses very sensitive subjects affecting our country from immigration to our border control, to police brutality, racism etc

Their new album ‘Strength In Numbers’ reminds us that together we can conquer it all and what’s really matters is that we all come together in unity and only then can we truly accomplish peace. There is so much passion when Jason sings to the audience, it comes from the heart and that is also projected back to him and in that moment, we are all one and there is absolute strength in numbers. Music breaks down all barriers of race, creed, sex etc., if we could be this to the world outside of these walls the world will truly be a better place. 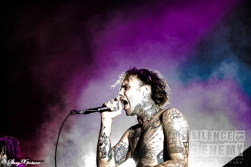 ‘Thrice’, an alternative rock band next to take the stage hails from California as well, signed to Epitaph records with Dustin Kenrue as lead singer and guitarist.

I was familiar with this band as a few of their songs have had some air play within the recent months.

The one song that did stand out in my mind was of course ‘Black Honey’ and apparently, I wasn’t the only one that I was waiting anxiously for it. Up until now the crowd has subsided from its rowdiness to a calmer mellow feel, just swaying and rocking to the beat however this one girl screamed every single word of this song so loudly that everyone around just looked and giggled and we all felt her excitement. A cool moment that was indeed. 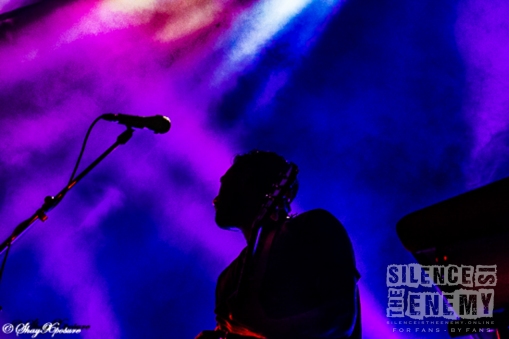 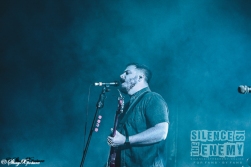 Finally, the moment we were all waiting for BMTH, as Oliver Sykes walked on stage the crowd went insane, screaming from excitement, jumping all and down but then there was the pushing which usually happens a lot at shows. It was too much for me as I’m petite and felt like I was being crushed. I literally thought I was probably going to puncture a lung in the chaos that I waited for the second song to end and battled my way to out to safety.

BMTH is an English rock band from the UK with Oliver Sykes as the lead singer signed to Columbia records in the U.S. While in the past they’ve put out 5 albums that were labelled along the lines of metal core, death core etc., their 6th album ‘Amo’ is a mixture of alternative, electric, pop rock. I’m a huge fan of all their albums thus far and was extremely curious to hear their new material live and they did not disappoint. Their new music was different, a fusion of trance, mixed with rock, and metal with a hint of orchestra. Some of the tracks on there although does discuss how their fans have been somewhat targeting their style or change in music condemning them for not being “heavy metal” enough. In the track ‘Heavy Metal’ Oliver states “I’m afraid you don’t love me anymore, cause the kid of the gram in the black dahlia tank say this s***t isn’t heavy metal”. So, there is this pressure that the band should not only produce an album soon but that it should also mimic their past ones. Well, it’s not fair to them and I can certainly understand their frustrations with their fans because they’re allowed to experiment with different styles of music and do something different if they so desire.

Knowing that all these tensions do exist regarding their changing style they didn’t differ from playing lots of their old music which is what most older fans were craving so that made them happy.  When everyone got into the old music it was easier transition to the newer stuff and it worked out perfectly.

I personally wanted to hear ‘Go To Hell For Heavens Sake’ but ‘Avalanche’ more than made up for it.

Everyone sang with all their hearts the same way Oliver did and that was magical.

The night ended with a feeling of satisfaction. It was a great experience and I got the same feedback from everyone else that I knew that attended as well. I would recommend going to see them live and I cannot wait for the next show.

Post-concert, the new ‘Amo’ (love) album can be described as ‘ZHU’ meets ‘Twenty-One Pilots’ to some extent.

Most of the songs from the album is BMTH stating their frustrations with their fans putting pressure of them to produce not only new music but that which mimics their old music, that depressed emo style metal core rock.

You can clearly feel the resistance from the band in a few of their songs like ‘Why You Gotta Kick Me When I’m Down?’ ‘What The F**k Have I Done’, They said, we just want your blood. You know we like you better in limbo.

Clearly Oliver is choosing to stay positive and it’s difficult to write depressing lyrics when your life is changing for the better, we can surely understand that.

So, what if they are no emo screams, what matters if how we feel when we listen to the music and if words can speak to your soul. The song ‘Mother Tongue’ does just that. It talks about Oliver meeting his new wife and there being a language barrier since she is from Brazil, but that connection was so strong that they found a way to fall in love and be together.  “Don’t say you love me “Fala amo” (love speaks). Just let your heart speak up and I’ll know”.  If the music moves, you then it’s good no matter the style and it’s always what BMTH has done.

Change is inevitable, either we embrace it or leave it. ‘Amo’ has hit number one on the charts in the UK. 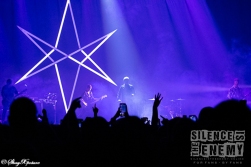 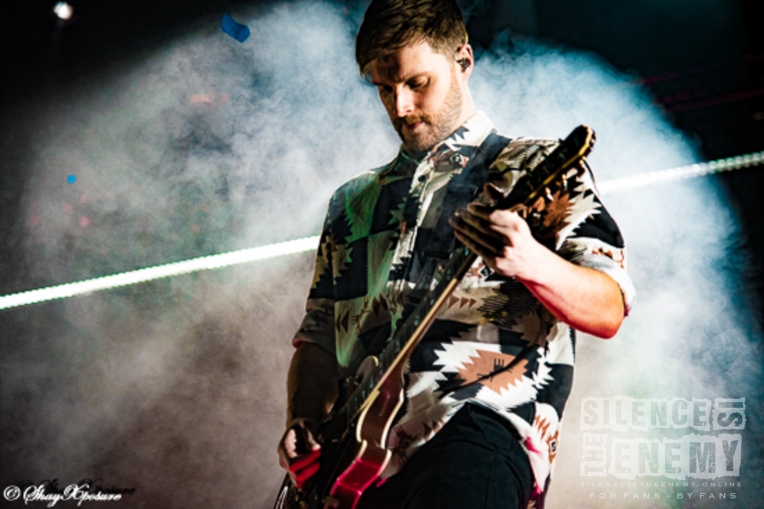